The Alhambra Catholic Invitational Tournament is organized by Wamba Caravan No. 89, International Order of the Alhambra.

The ACIT is based in Cumberland, Md., in Allegany County. Traditionally held on the third weekend of March, the tournament makes use of the Cumberland Holiday Inn as it's center of operations, and Frostburg State University's Bobcat Arena in nearby Frostburg, MD as it's game venue.

Since it's beginning in 1961, the A.C.I.T. has been host to 85 teams from 10 states, the District of Columbia, and Canada. Many of the players and coaches that have participated in the tournament have gone on  to find success in College and the NBA. 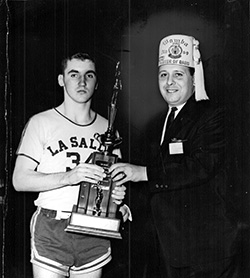 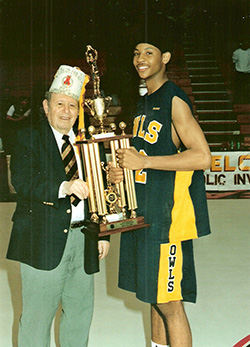 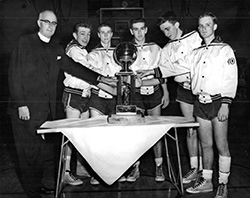 While the A.C.I.T . has for many years been known for inviting some of the best Catholic high school teams in the United States and Canada to the annual tournament, it began in 1961 on a much more modest scale.

The seeds for the A.C.I.T. were actually sown in 1958 and 1960, when LaSalle High School, predecessor of Bishop Walsh High School, enjoyed two of its better basketball seasons in many years. LaSalle was invited to participate in the Eastern States Catholic Invitational Tournament in Newport, Rhode Island, and the Knights of Columbus Invitational in Washington, D.C.. Joe Divico, who has served as general chairman of the A.C.I.T. for the first forty-three years of its existence, served as chairman of a committee to raise funds to send the LaSalle teams to Newport and Washington, and accompanied the team to these tournaments. While he was impressed with the quality of basketball played at both tournaments, Joe came away from them with two other impressions. First, there should be an annual post-season tournament held locally where LaSalle and other similarly situated Catholic schools, who are ineligible to participate in state public school tournaments, could play on a regular basis without having to travel great distances; and, Second, in addition to presenting high quality basketball, a high school tournament should also encourage players and team followers to socialize, make friendships and enjoy themselves off the court, so that the few hours spent on the basketball court do not provide the only memories of their visit to Western Maryland that the players will take home . With these thoughts in mind, early in 1961, Joe Divico, an active member of Wamba Caravan, proposed that the Caravan sponsor, a short six weeks later, a high school basketball tournament in Cumberland. The membership voted their approval, and the Alhambra Catholic Invitational Tournament was born.

The first annual A.C.I.T was held at SS. Peter & Paul gymnasium in Cumberland, in March, 1961. Following its original vision of the tournament as one in which smaller schools could be competitive, the committee limited participation to "class B" schools, having less than 350 male students in the top three grades In the initial championship game, St. George High School, from Pittsburgh, PA, defeated LaSalle 59-54, before a standing room only crowd in the small gym. The interest shown by the local and visiting fans answered any questions as to whether the A.C.I.T. would be a one time tournament.In 1962 after receiving support from the Allegany County Board of Education, the A.C.I.T moved to the much larger Allegany High School gymnasium, which seated 2200 fans. The tournament remained at this location for sixteen years, frequently filling the gym to capacity. After conducting the tournament for "class B" school for six years, the tournament committee made the difficult decision to abandon the concept of a small school event. The general feeling at the time was that the advantages of being able to invite some of the truly outstanding Catholic basketball teams in the country would outweigh the disadvantages of compelling smaller schools to play their larger competitors. It was also becoming obvious that, because of the growing restrictions on competition in post season tournaments by the schools then participating, the continued existence of the tournament as originally conducted was in question. Beginning in 1967, the A.CI.T became an "open" tournament.

The next major change in the format of the tournament occurred in 1977 when, because of the SRO crowds that were becoming routine at the Allegany gym, the competition was moved to the Frostburg State University physical education center, which seated 3700 fans. The tournament has been conducted at this location until the present time.

On March 20, 2003, within one week after the conclusion of the forty-third annual A.C.I.T., General Chairman Joseph F. Divico, the founder and guiding force behind our tournament for the entire period of its existence, died suddenly while attending to A.C.I.T. business. In the weeks following Joe’s death, many questions arose concerning the future of the A.C.I.T.. The consistent theme of and unanimous consensus resulting from these discussions was that the tournament must continue as a living memorial to Joe Divico, and to the principles to which he dedicated himself for forth-three years. To continue this tradition, Wamba Caravan appointed Joseph W. Carter, a former A.C.I.T. player and coach at Bishop Walsh High School, a Past Grand Commander of Wamba Caravan, and an active tournament committee member and close assistant to Joe Divico for many years, as our new General Chairman.

Over the long history of the A.C.I.T.,many players have moved on to outstanding careers at the college and N.B.A. levels. Several players have returned to Cumberland as head coaches, some for schools other than the one for which they played. Following the careers of A.C.I.T. participants has become a hobby for the many supporters who follow the tournament each year. Many high school coaches, college coaches and fans return to Cumberland each March, even if the team with which they are associated is not participating. Many Western Maryland residents look forward to watching the highest quality of basketball that can be seen locally in person, and many out- of -areas visitors look forward to returning to Allegany County for the basketball and the social activities that are a part of the tournament. These are the factors that have caused the Alhambra Tournament to continue as a premier community event for so many years.

While the tournament is Catholic school event, it has enjoyed the financial and personnel support from the Allegany County Commissioners, the Mayor and City Council of Cumberland, Frostburg State University, and numerous area businesses, fraternal organizations and individuals, without regard to religious affiliation. Without this community support, the A.C.I.T. could not exist, and for it, WE ARE EXTREMELY GRATEFUL! 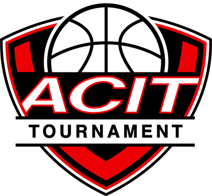